The Two Literary Journals That Are Shaping Cultural Tastes: Review Of Phenomenal Literature And Verbal Art By Dr Sunil Sharma 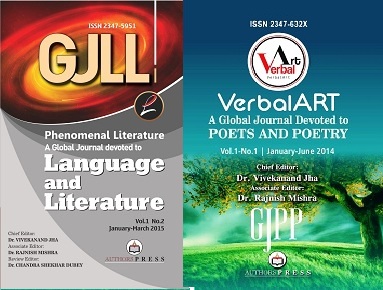 You can call it the New Journalism of aesthetics.

With the opening up of cyberspace and increasing penetration by a professional, English-educated middle-class in the post-1990s India, its bold aspirations for a better and more equitable world are being handled by a more assertive social media. With FB and Twitter, among other notables, the vision and dream of this substantial class are getting articulated in a big way. With Instagram and other tools like YouTube and WhatsApp, the youth are finding avenues for self-expression in every realm of social living in a society undergoing rapid transformations and getting integrated within a globalised economy driven by the twins of an excessive consumption and expanding markets for that piece of mind-share dictating choices of such a large-level consumption of goods across a supposedly border-less world. All this desire for consuming new commodities at a furious rate accords well with the apologists of the globalisation, marketisation and liberalisation as the mantra for the unbridled growth of economies everywhere but it also leads to a new poverty of  ideas and a concomitant hunger for them, especially, in the field of entertainment. That venerable Hollywood is latching on the Marvel Comics or other toons or strips like Tintin and the Simpsons and investing billions in animation films to give a different experience to a cynical and jaded viewer is enough testimony to the intrinsic desperation for new ideas, experiences and packages that can give you a high or a thrill.

Sadly, as a viewer, you feel unsatiated and empty, not fulfilled by this kind of fare, mindless, repetitive and organic to the ideology of the big studios or publishing houses for which art is nothing but escapist stuff…and well, mere entertainment. Time pass, as we say in India.

Some call it pop art.

Its aim is maximising profits.

Talking of a hundred crore or a million turnover is kosher and that holy turnover is a new benchmark rather than the intrinsic artistic features of such a product.

What can you expect from a Fifty Shades of Grey?

Or, the Harry Potter mania?

In such a predictable, copy-cat mass market, the hunger for an aesthetics for solid new spiritual truths grows exponentially. We need a Beckett or a Pinter or an Ionesco for our age.

Otherwise the town may turn into another epidemic of rhinoceros visiting its streets.

With shrinking literary space in mass media, the cyberspace offered some hope of deliverance from conformism. Blogs and online journals have replicated and the genre of new literary journalism is thriving there.

In this enabling and liberal space, the two literary journals published by Authorspress and edited by a well-known writer Vivekanand Jha and academicians Dr Chandrashekhar Dubey and Dr Rajnish Mishra, are a standout on the basis of their sheer quality of content and  the delivery of such a consistency for the quality as a primary parameter for their existence, and, above all, the vision and mission of the editor and his team. Appropriately, entitled as Phenomenal Literature and Verbal Art.

Talking of his agenda, Jha writes in one of the editorials that sums up his credo so finely: “Phenomenal Literature is an attempt at foregrounding the understanding of the world as perceived in and through literature. It attempts at “a disinterested endeavour” to select the creative and critical gems from the fields of literature and criticism and present them to the reader looking at the world with a changed perspective afterwards. It takes the complete creative spectrum and contour of novels, poetry, short stories, drama, plays, translations, book reviews, interviews, critical/academic /research articles, essays, biographies, autobiographies, memoirs, travelogues and other creative writings in English as its province. The approach that it adopts is interdisciplinary, and its focus is upon literature. The array of works and creators that find space on the pages of Phenomenal Literature will make it clear that the literature presented there is weltliteratur.”

The writings being offered consistently in these e-journals are real remarkable. They are phenomenal! In a way, both the journals provide soul-satisfying content; a new kind of truth that counters reification and resists attempts of a market economy to commodify us and our emotions, feelings and thinking. Each issue is lovingly edited, produced and presented to a global audience hungering for counter culture, the equivalent of the avant garde, the Beat Gen and other radical writing that subverts the crass commercialism of magazines peddling dumb stuff. The two journals---part of New Literary Journalism---like to challenge the notion of art as entertainment or time pass. Its writings---prose; poetry; reviews, and, interviews---question the logic of a profit-seeking market economy by positing Beckett-like art that subverts such expectations and thus, heighten our passive consciousness into a critical one, reviewing old verities from new positions of readerly strength and critical cognition.

Vivekanand Jha, in the process, has also undergone a parallel transformation. Of late, he has turned into a very fine poet observing life’s ironies from a vantage position of an involved artist and activist. He highlights poets and writers struggling to enter into mainstream but denied so far by the elites guarding the gateways as un-moving guardians. Jha through his edited anthologies and these journals are refining tastes and Arnold-like, reformulating the canon of current writing. His journals feature writers consolidating their positions fast. He is making the till-now-perceived plebeians into major figures of art.
Jha is making us see the world from a different perspective, assisted ably by his fellow writers.

It is a new aesthetics of change; journalism dispensing spiritual truths that might be inconvenient to the elites.

But then, that is the chief role of literary journalism and writing.

Art---not entertainment but as serious mode of perceiving the world---and altering it as well for general welfare.